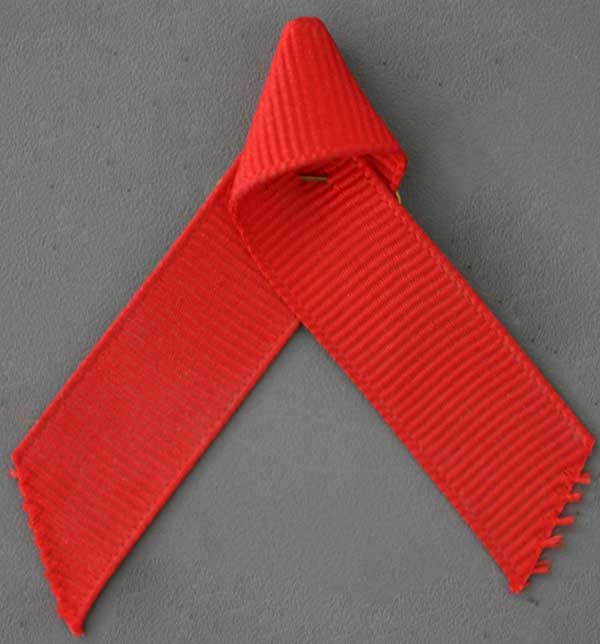 DISCUSSION: The original red ribbon was created in 1991 to recognize people living with HIV and AIDS along with their caretakers.  It was created by the Visual AIDS Artists Caucus in a collaborative gesture although sometimes Frank Moore, a painter who subsequently died from AIDS, is given credit for the idea of the ribbon based on his observation of yellow ribbons around the trees in upstate New York that were intended as symbols for the safe return of soldiers from the first Persian Gulf war.

The first red ribbon has an easily recognized inverted -V- a direct reference to ACT-UP’s re-appropriation of the Nazi’s (pink) triangle that had been used to identify ‘homosexuals’ in the death camps of WWII. The flyer that accompanied the first ribbon (like the one pictured above) stated: “Cut red ribbon 6″ in length, then fold at the top into an inverted ‘V’ shape. Use a safety pin to attach to clothing.” But by the time the red ribbon was first worn in public by Jeremy Irons at the 1991 Tony Awards, the inverted V resembled the rounded edge of a heart, a shape that was more palatable, perhaps, for the ribbon’s new role as a politically correct statement worn on the lapels of celebrities or displayed on the porch of a White House (and a shape that is much easier to form out of a ribbon).

In 2011, Visual AIDS has commissioned buttons to be worn with a red ribbon in an attempt to wrest back meaning from these “worn once a year” fashion accessories. Artists A.K. Burns, John Chaich, Joe De Hoyos, and Avram Finkelstein each created a unique set of buttons with the same words emblazoned on their surface: NOT OVER.  Paired with red ribbons, 10,000 NOT OVER buttons were distributed beginning on Day With(out) Art – December 1, 2011.

Collections at the ICI: AIDS; Firsts