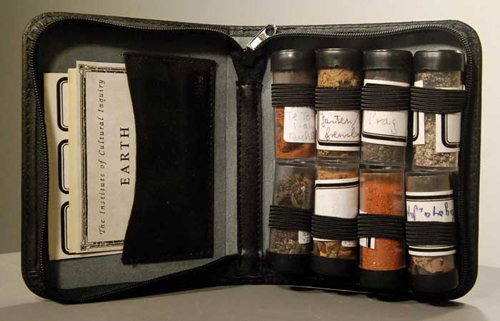 Earth and Sampling Kit with dirt from around the world

Data Collection is sometimes undertaken before a research ‘question’ is in mind. Some materials are collected because their physical presence is absorbing and compelling. Other times we encounter objects or their fragments that disrupt our current belief systems even when the relationship of their content (or context) to knowledge production is still unknown. By collecting these objects and keeping their ‘part ideas’ in circulation, visual researchers become knowledge custodians; they can play an important role between the ideas of today and tomorrow.

In science, data collection is often associated with evidence, with something that confirms a proposed or accepted ‘truth.’ At the ICI, data collection provides us with clues. Evidence must be unwavering, clues lay dormant until they are discovered and even then, until that are read. The ‘data’ we collect is not evidence of a past truth but rather a reserve for future possibilities.

The Earth and Sampling Kit is one of the oldest of the ICI-made tools for aiding the task of enquiry’s most basic technique – data collection. The first kits were for earth samples but over the years it has expanded to accommodate samples of earth, rock, plant, and earth’s watery fluids.

This entry was posted in Earth Cabinet, ICI Methods and Techniques, Tools + Arcana, We are the ICI/ and tagged ICI Methods. Bookmark the permalink.