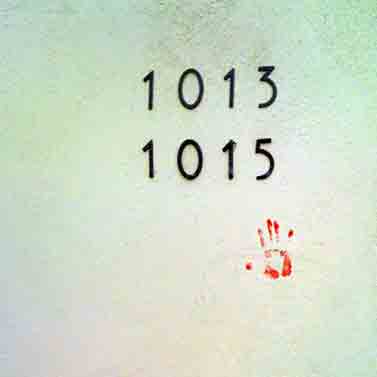 A red palm print near an otherwise immaculately maintained doorway in Santa Monica. It resists inclusion in the visual marginalia that defines most urban sites. The red palm is the sign of the gypsy, of the palm reader, of the anarchist, and is used in some countries to ward off the evil eye. Does it represent the blood that remains on the hand of one who kills for hidden aims; or one who is caught, as in red-handed; or is it the bodily remainder of a hand that has spent an evening painting the town red?; Some red hands are  related to the symbol on the flag of Ulster in N. Ireland. That stylized palm print  alludes to the mythical figure of Labraid Lámh Dhearg who so feared he would lose a boat race and its promised prize—the kingdom of Ulster, that he  cut off his hand and threw it to the shore.

Whatever its source, the red hand is the most visceral of signs. As one born from the human body (an icon, index and symbol all at the same time) it can never be fixed. It floats through and between family narratives, local traditions and a society’s visual imaginary. It is a signpost from the edge whose meaning is generous (open to so many interpretations) and yet so allusive, like other marginal stories from the culture to which it is aligned.