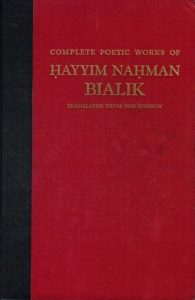 Last Line: “Through his free and powerful rhythms, through his radiant songs of nature, which were novel in their joyousness and abandon, and through those poems in which directly and indirectly the call of time for national action found fiery expression, he turned Jewish life to its utmost and gave modern Hebrew literature a new and vigorous impulse and a place in contemporary world-literature.”