As Susan Stewart has proposed, the miniature operates at the place of origin—the childhood of the self—creating an “interior temporality of the subject,” a place for private contemplation. When the physical dimensions of material ideas are decreased, so too are the roles of hierarchy and narrative. Miniaturization reduces objects to their signifying properties and brings them ‘to life’ by erasing history; we become lost in the miniature’s “presentness,” as Stewart calls it (On Longing).

In the early years of the ICI, when the Institute lacked a permanent home, we gathered many aspects of the organization into a small carrying case that we dubbed The Institute in a Box. Initially conceived as an homage to Marcel Duchamp’s Box in a Valise (From or by Marcel Duchamp or Rrose Sélavy) the box quickly took on other, more creative roles. Matchboxes held ‘vision bites’ of Associates’ projects and reproductions of objects and text from the ICI Ephemera Kabinett were added on scraps of paper with varying degrees of transparency. Small representations of ICI projects rounded out the contents along with a tweezer and a stereo-viewer positioned above a platform where the objects, papers and remnants could be positioned to created fantastic ‘visions.’ No longer just a show and tell gallery, the Institute in a Box came to reflect the working processes of the ICI; the parts of the miniature Institute were seen less as representations of received knowledge and more as interchanging parts of a research toolbox, ripe for interpretation within every-changing contexts. 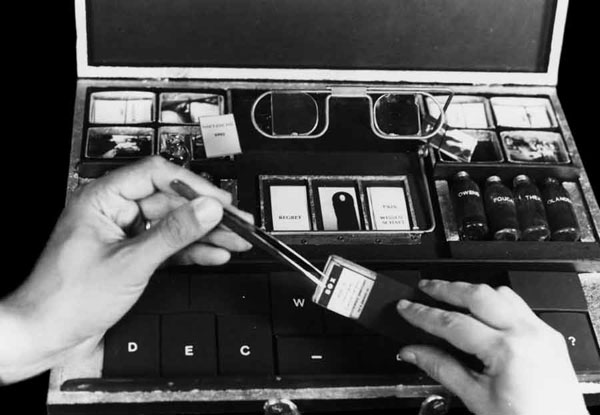 Through many interactions, the box now holds something more than what was there to begin with; this surplus being created by what Graeme Sullivan calls the ‘logic of invention and innovation’ (“Artefacts as evidence within changing contexts,” 2006). After years of play, the Institute in a Box has generated ideas for new ways of knowing and a set of technics we have applied to other ares of research such as Shuffling.