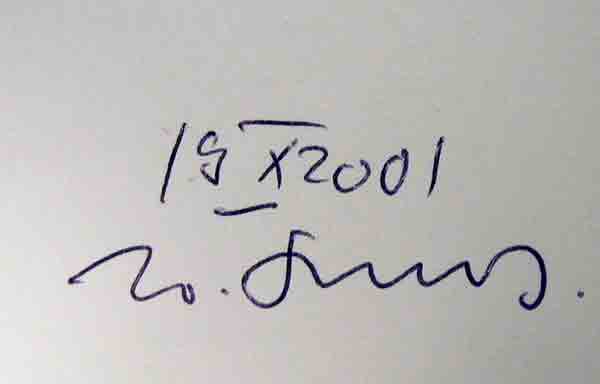 As a form of written language, the signature is, in theory, a symbolic sign. Its relationship to the person who creates it is arbitrary and based totally on convention and cultural practice. In reality, though, the signature is a very special form of written language. Over a lifetime it becomes stylized, shortened, and often unreadable. And in so doing, it retreats to a semiotic nomansland.

In this signature of W. G. Sebald, the author might be using the first initial of his given name (Winifred) or the first letter of his preferred moniker—Max, a name known by all but used only by family and friends. It is hard to tell. In either case, the first period can be linked to a desire for a neat and tidy abbreviation – announcing but also lassoing the initial letter of his first (given or preferred) name. But what about the second ‘dot’ that comes after ‘Sebald.’ Is it a vestigial remainder of his professional name, a trace left in the signature without the attendant G? Like a period at the end of a sentence, Sebald completes his signature with a quick lift of the pen and then a final stab at the paper, a gesture of finality and a testament to the indexical underpinnings of any written language.

Sebald’s signature was ‘finalized’ in the fall of 2001, when his last book brought him the praise he most certainly deserved but also a steady stream of book-signing opportunities, one of which produced the signature reproduced above. A month later, Sebald was dead at the young age of 57 and so, in that crystal clear mirror of history, the two periods take on a more prescient tone: Sebald’s signature also contains the sign of its own demise. In the end, the private signature is made ‘public,’ the symbolic becomes iconic and is chiseled into a graveyard stone.