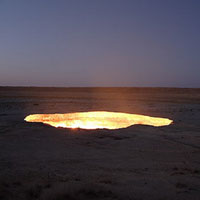 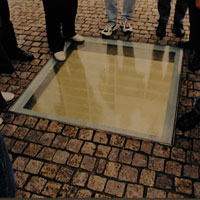 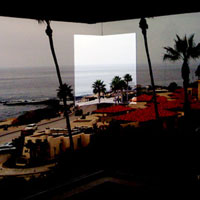 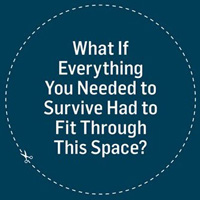 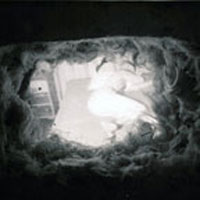 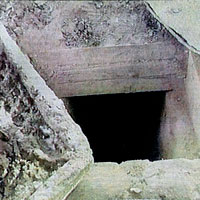 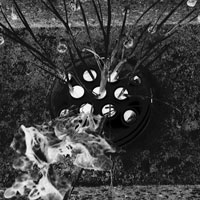 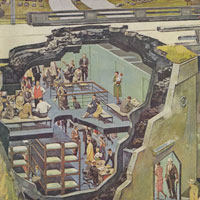 In the late 1980s, ICI associate Axel Forrester recreated a (screen) memory of a dream that followed her out of sleep and embedded itself, like the shroud of Turin, into her pillow. The photograph of that imagined “dream image,” captured during a reenactment that featured the actual pillow, has come to figure prominently in Forrester’s films and in ICI mythology and projects such as Traumbagger.

In fact, holes show up so many times in the ICI Ephemera Kabinett—in visual field notes from Interpretive Field Projects, and in a variety of public documents culled from the printed press and the internet—that we needed to post a second rhizome to fully explore the powerful role holes have played in the  human (and the ICI) imaginary.

Holes mark a rupture in the structures we like to think are impermeable like the human body and the surface of the earth; they leak and spew and sometimes suck us into unknown realms. Some people are so troubled by their presence that they suffer from trypophobia – an intense and sometimes irrational fear of holes provoked by clusters of holes particularly lotus seed pods, honeycomb, bubbles in dough or the holes in a metal flower holder we once found near an unattended grave. Some holes are generous, such as the imagined domesticated holes of 1962 America that provided shelter to a nation on the ‘brink of annihilation.’ But holes can also trap you, like the the spider hole of the trapdoor spider and its military namesake that was used to describe the hiding place of a hunted criminal, or the temporary home of 33 men trapped in a collapsed Chilean mine. Yes, holes mark our beginning and our end but in between they inspire us, provoke us and sometimes even haunt us in profound and meaningful ways. After perusing the many ‘holes’ of the ICI Ephemera Kabinett we can confidently answer the question posed in the image at the center of this grid: “we would figure it out” in the most creative and thought-provoking way.